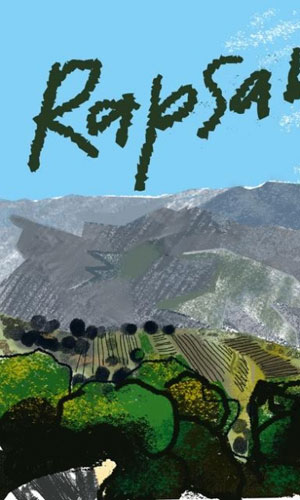 The Modern Greek wine industry is uniquely positioned to take advantage of this existing pool of story telling, using it to weave a complete narration that encompasses so much more than only a wine or a grape variety.

Take Mount Olympus, a region that is not only of great sentimental value for all Greeks, but is universally recognized. Rooted here are the settings of many Greek mythical stories, after all, the twelve ancient Greek gods lived there. It is the highest mountain in Greece and the second highest in all of the Balkans. Sheer rocky peaks, deep gorges, and fog-covered peaks all create a rare magic.

Nestled into this magic lies the important PDO zone of Rapsani. Mentions of the local wines are traced back to 300BC. Today, the Rapsani vineyards extend in the southern slopes of Mount Olympus, reaching an altitude of up to 800 meters (2625 feet). The terrain is rugged, wild and coarse, with slope inclinations of up to 20%. It is a stunningly beautiful, raw and unpolished area with up to 15 degrees Celsius differences in temperature between day and night.

Under the PDO appellation laws, co-vinification of equal parts of the three indigenous varieties Xinomavro, Krassato and Stavroto must take place. These vines were traditionally grown mixed in the vineyards; only in the last years were single varietal vine parcels planted instead.

While there are some remarkable boutique wineries located in the zone, no one has impacted it as much as Tsantali, who must be credited with rejuvenating viticulture in the region after a devastating decline it the late 1980’s. In addition to successfully supporting and educating local vine growers, Tsantali managed to develop a strong brand name for Rapsani in the export markets. Two main factors made this possible: A very professional communication and marketing strategy, and a high quality, well priced product that is distinctively Greek, yet astoundingly international in style.

Efforts to further raise the reputation of Rapsani are being constantly expanded. The ‘Rapsani Wine Adventure’, which raises wine tourism to a new level, is just one example. In my opinion, the advantages of this pursue are multiple: The brand Tsantali is becoming synonymous with Rapsani (not necessarily the other way around). This in turn should assure a continuous strive to keep increasing quality as much as possible in the PDO zone. The future income stream of the nearly 100 vine growers who work with Tsantali should also be secure. Lastly, other wineries in the region might very well benefit from the branding of Rapsani. They are needed, in order to showcase the diversity of the wine quality to the world.

I strongly feel that Tsantali are currently doing things right and I look forward to revisiting this article in a few years time.